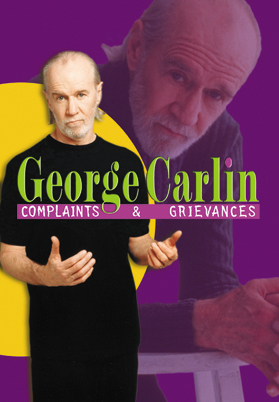 In this hourlong made-for-cable comedy special, taped live at the Beacon Theater in New York City, veteran comic George Carlin combines his typically dirty-mouthed observational humor — including material from his book Napalm & Silly Putty — with jokes and anecdotes of a decidedly splenetic nature. An extended introduction establishes Carlin’s New York credentials and addresses the aftermath of the World Trade Center and Pentagon attacks of September 11, 2001 (which occurred after most of the set’s material was written). Carlin then lightens the mood, poking fun at a wide range of subjects, from farts and “lip crud” to traffic accidents and Andrew Lloyd Webber. Once he’s warmed up, though, the meat of his performance consists of a list of “People Who Ought To Be Killed.” These include readers of self-help books, parents who display bumper stickers about their kids’ “minor academic achievements,” men who use hands-free cellular telephones on the street, people who wear visors, singers without surnames, folks who state the obvious on their answering machines, hot air balloonists, consumers who buy gum and other small-ticket items with their charge cards, gun enthusiasts and would-be space colonists. Over-the-top profanity and oblique social commentary lace each of these extended complaints and grievances. The final piece of material — an explanation of why the Ten Commandments should have been reduced down to the Two Commandments — brings the set full circle as Carlin vents his political and religious beliefs and makes pointed barbs at religious fanatics who kill in the name of god. George Carlin: Complaints and Grievances was broadcast live on HBO on Nov. 17, 2001. The comic’s longstanding relationship with HBO stretches back to 1977; Complaints and Grievances is his 13th special for the premium cable network.